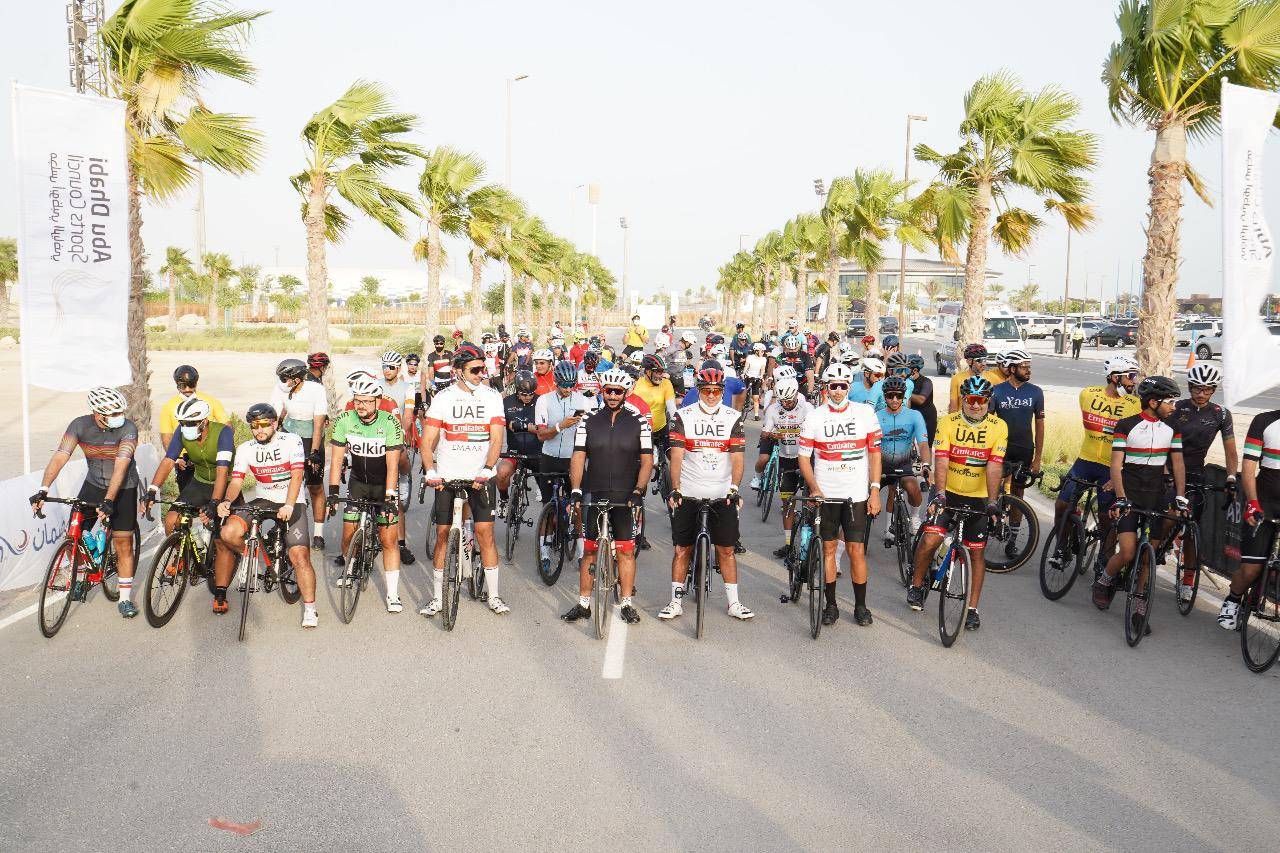 The Abu Dhabi Cycling Club (ADCC) organised an event on Al Hudayriat Island to celebrate UAE Team Emirates’ winning of the Tour de France title for the second year in a row, after its promising Slovenian rider, Tadej Pogaar, managed to be at the top of the standings at the end of the 21st and last stage.
The event was attended by Matar Suhail Al Yabhouni, Chairman of Abu Dhabi Sports Council (ADSC), Aref Hamad Al Awani, ADSC Secretary General and Khalid bin Shaiban Al Muhairi, Deputy Chairman of ADSC.
About 150 cyclists participated in the event, which was held under the title “Tour de France Jerseys”, during which they expressed their joy at the great achievement of the UAE Team Emirates as it continued to record its historical victories and retained the Tour de France title, which is considered one of the most ancient, famous and thrilling tours worldwide.
The 22-year-old Slovenian made cycling history by becoming the youngest rider to win the title for two consecutive years, while cementing his position as the world’s best Grand Tour rider.
During the event, Matar Suhail Al Yabhouni said: “We are proud of this achievement by the UAE Team Emirates, thanks to the support and encouragement of the rational leadership, sponsors, and the engagement of high-level riders and technical staff. We prepared early for this race, and as a result of this effort, we succeeded in bringing the promising team to be among the elite in the world.”
For his part, Aref Hamad Al Awani said that the UAE Team Emirates has proven its worth and has become among the world’s pioneers in this sport, and it is accomplishing successive achievements one after another, being a reflection of its tireless efforts, hard work and enlightened planning, and thanked the team’s management, riders and technical staff for what they achieved in the name of Homeland after a strong competition, during which the team succeeded in leading the scene.
Moreover, Khalid bin Shaiban, on his part, confirmed that UAE Team Emirates managed to score a great success in the international championships in which it participated, such as the UAE Tour, organised by the State last February, or the Tour de France, which was held recently, triggering a significant global interest, and enhancing the team’s position as one of the best cycling teams worldwide.
Al Nekhaira Al Khyeli, ADCC’s CEO, praised the remarkable achievement of the cycling UAE Team Emirates, and he said that Team Emirates includes some of the best riders worldwide, and thanks to the support and encouragement of the wise leadership, it succeeded in being among the elite in the world.
The UAE team rider Pogaar exhibited an exceptional performance in the individual time trial in the fifth stage of this year’s Tour de France, thanks to him he took first place in the race, after winning the yellow jersey with a time total of 82:56:26 over a course of 21 stages that started from the French city of Brest in Last June 26 and ended July 18 in Paris.
Pogaar won two mountain stages in the Pyrenees, as well as an individual time trial, a testament to his all-round qualities. He finished the Tour with the white jersey for the best Under-26 rider in the race and with the polka-dot jersey for the mountains classification, just like last year.
Tour de France champion Tadej Pogaar said: “I am thrilled to have won one of the world’s most important cycling races, and I thank the Team’s officials for putting their trust in me and thanks to all my teammates who have supported me throughout the races.